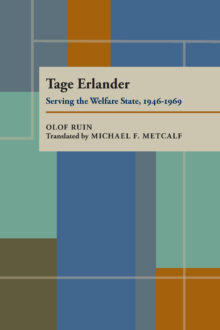 Prime minister of Sweden and leader of the Social Democratic party from 1946-1969, Tage Erlander enjoyed a career that was remarkable both for its major accomplishments and longevity. Under his leadership, Sweden became an exemplary welfare state following World War II. Universal pensions, child support, health insurance, extended paid vacations, subsidized housing, and many other benefits made Sweden's standard of living the envy of the world. This definitive political biography is both the study of an individual style of leadership and the role of the prime minister in a parliamentary state. It shows Erlander as a complex and engaging intellectual fiercely loyal to his party, agitative yet dedicated to cooperation between parties.Olof Ruin analyzes Erlander's various roles as Riksdag caucus leader, cabinet organizer, party leader, promoter of domestic consensus, and foreign policy maker. Ruin is the first scholar to be given unrestricted access to Erlander's diaries.