Pablo Calvi is an assistant professor at Stony Brook University School of Journalism. 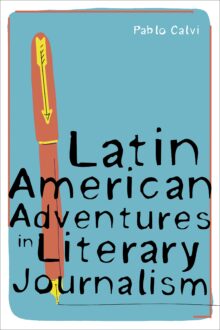 Latin American Adventures in Literary Journalism explores the central role of narrative journalism in the formation of national identities in Latin America, and the concomitant role the genre had in the consolidation of the idea of Latin America as a supra-national entity. This work discusses the impact that the form had in the creation of an original Latin American literature during six historical moments. Beginning in the 1840s and ending in the 1970s, Calvi connects the evolution of literary journalism with the consolidation of Latin America’s literary sphere, the professional practice of journalism, the development of the modern mass media, and the establishment of nation-states in the region.