Pamela H. Smith is Seth Low Professor of History and founding director of the Center for Science and Society at Columbia University where she teaches history of early modern Europe and the history of science. 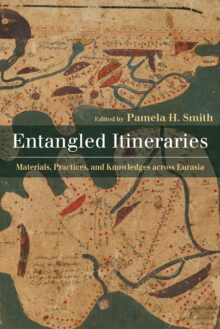 Materials, Practices, and Knowledges across Eurasia

Trade flowed across Eurasia, around the Indian Ocean, and over the Mediterranean for millennia, but in the early modern period, larger parts of the globe became connected through these established trade routes. Knowledge, embodied in various people, materials, texts, objects, and practices, also moved and came together along these routes in hubs of exchange where different social and cultural groups intersected and interacted.

Entangled Itineraries traces this movement of knowledge across the Eurasian continent from the early years of the Common Era to the nineteenth century, following local goods, techniques, tools, and writings as they traveled and transformed into new material and intellectual objects and ways of knowing. Focusing on nonlinear trajectories of knowledge in motion, this volume follows itineraries that weaved in and out of busy, crowded cosmopolitan cities in China; in the trade hubs of Kucha and Malacca; and in centers of Arabic scholarship, such as Reyy and Baghdad, which resonated in Bursa, Assam, and even as far as southern France. Contributors explore the many ways in which materials, practices, and knowledge systems were transformed and codified as they converged, swelled, at times disappeared, and often reemerged anew.