Patricia Donahue is professor of English and director of the college writing program at Lafayette College. She is coauthor of The Elements (and Pleasures) of Difficulty and coeditor of Reclaiming Pedagogy: The Rhetoric of the Classroom. 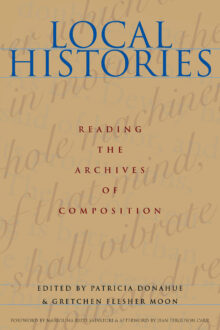 Reading the Archives of Composition

In Local Histories, the contributors seek to challenge the widely held belief that the origin of American composition as a distinguishable discipline can be traced to a small number of elite colleges such as Harvard, Yale, and Michigan in the mid- to late nineteenth century. Through extensive archival research at liberal arts colleges, normal schools, historically black colleges, and junior colleges, the contributors ascertain that many of these practices were actually in use prior to this time and were not the sole province of elite universities. Though not discounting the elites' influence, the findings conclude that composition developed in many locales concurrently.
Individual chapters reflect on student responses to curricula, the influence of particular instructors or pedagogies in the context of compositional history, and the difficulties inherent in archival research. What emerges is an original and significant study of the developmental diversity within the discipline of composition that opens the door to further examination of local histories as guideposts to the origins of composition studies.