Patricia Suzanne Sullivan is assistant professor of English and director of the first year writing program at Northeastern University. 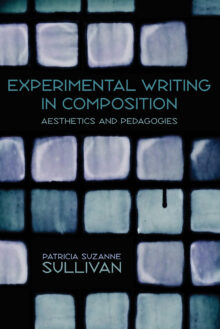 From the outset, experimental writing has been viewed as a means to afford a more creative space for students to express individuality, underrepresented social realities, and criticisms of dominant socio-political discourses and their institutions. Yet, the recent trend toward multimedia texts has left many composition instructors with little basis from which to assess these new forms and to formulate pedagogies. In this original study, Patricia Suzanne Sullivan provides a critical history of experimental writing theory and its aesthetic foundations and demonstrates their application to current multimodal writing.

Sullivan unpacks the work of major scholars in composition and rhetoric and their theories on aesthetics, particularly avant-gardism. She also relates the dialectics that shape these aesthetics and sheds new light on both the positive and negative aspects of experimental writing and its attempts to redefine the writing disciplines. Additionally, she shows how current debates over the value of multimedia texts echo earlier arguments that pitted experimental writing against traditional models. Sullivan further articulates the ways that multimedia is and isn’t changing composition pedagogies, and provides insights into resolving these tensions.