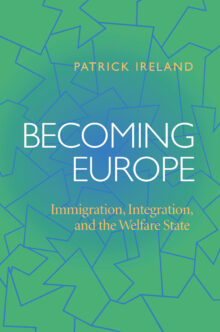 Immigration Integration And The Welfare State

Across Europe, millions of immigrants, refugees, and asylum-seekers have often had difficulties fitting into their new societies. Most analysts have laid the blame on a clash of cultures. Becoming Europe provides evidence that institutions matter more than culture in determining the shape of ethnic relations.

Patrick Ireland argues that it is incorrect blithely to anticipate unavoidable conflict between Muslim immigrants and European host societies. Noting similarities in the structure of the welfare states in Germany, the Netherlands, and Belgium—as well as in their respective North African and Turkish immigrant communities—he compares national- and city-level developments to show how approaches toward immigrant settlement have diverged widely and evolved over time.

Becoming Europe demonstrates how policymakers have worked hard to balance immigrants’ claims to distinct traditions with demands for equal treatment. Ultimately, it reveals a picture of people learning by doing in the day-to-day activities that shape how communities come together and break apart.