Paul Taylor, a dominant force in dance for four decades, is the recipient of more than forty awards, including three Guggenheim fellowships, six honorary doctor of fine arts degrees; a MacArthur Foundation Fellowship, and the Samuel H. Scripps ADF Award – both for lifetime achievement. Other awards include the New York State Governor’s Arts Award, the New York City Mayor’s Award of Honor for Art and Culture, an Emmy Award, a 1992 Kennedy Center Honors award, a 1993 National Medal of Arts, the 1995 Algur H. Meadows Award for Excellence in the Arts, and one of six recipients of the 1998 Doris Duke Awards for New Work. 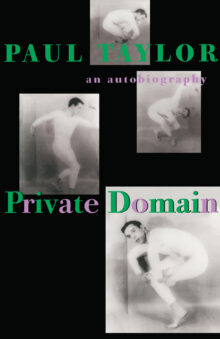 By Paul B. Taylor

Taylor explores aspects of himself that have affected his work. He delves into the creation of Aureole and From Sea to Shining Sea, from their initial inception to the ways in which specific dancers influenced the choreography, including such notables as Pina Bausch, Laura Dean, David Parsons, Twyla Tharp, Dan Wagoner, Senta Driver&mdash;all of whom went on to form their own companies&mdash;and others&mdash;Bettie de Jong, Nicholas Gunn, and Carolyn Adams&mdash;who remained as much a part of the Taylor style as the choreography itself. Taylor writes with sincerity, wit, and charm of his associations with Martha Graham, Merce Cunningham, Jerome Robbins, Anthony Tudor, George Balanchine, and many others.