Paul Hoyningen-Huene is director of the Center for Philosophy and Ethics of Science at the University of Hannover, Germany. 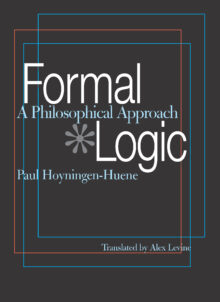 Many texts on logic are written with a mathematical emphasis, and focus primarily on the development of a formal apparatus and associated techniques. In other, more philosophical texts, the topic is often presented as an indulgent collection of musings on issues for which technical solutions have long since been devised.
What has been missing until now is an attempt to unite the motives underlying both approaches. Paul Hoyningen-Huene’s Formal Logic seeks to find a balance between the necessity of formal considerations and the importance of full reflection and explanation about the seemingly arbitrary steps that occasionally confound even the most serious student of logic. Alex Levine’s artful translation conveys both the content and style of the German edition. Filled with examples, exercises, and a straightforward look at some of the most common problems in teaching the subject, this work is eminently suitable for the classroom.