Paul Krause, a native of Pittsburgh, is Assistant Professor of History at the University of British Columbia. 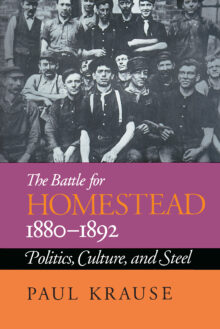 Named one of the fifty best books of 1992 by Publishers Weekly More than a century has passed since the infamous lockout at the Homestead Works of the Carnegie Steel Company. The dramatic and violent events of July 6, 1892, are among the mst familiar in the history of American labor. And yet, few historians have adequately addressed the issues and the culture that shaped that day. For many Americans, Homestead remains simply the story of a bloody clash between management and labor. In The Battle for Homestead, Paul Krause calls upon the methods and insights of labor history, intellectual history, anthropology, and the history of technology to situate the events of the lockout and their significance in the broad context of America’s Guilded Age. Utilizing extensive archival material, much of it heretofore unknown, he reconstructs the social, intellectual, and political climate of the burgeoning post-Civil War steel industry. The Battle for Homestead brings to life many of the individuals -both in and outside Homestead- who played a role in the events leading to July 1892. From the inventor of the modern Bessemer steel mill to the most obscure immigrant workers, from Christopher L. Magee, the “boss” of Pittsburgh machine politics, to Thomas A. Armstrong, the tireless editor of the National Labor Tribune, from the “Laird of Skibo” himself (Andrew Carnegie) to the labor leader and mayor of Homestead, “Old Beeswax” (Thomas W. Taylor), Krause shows how all these lives became intertwined, often in surprising and unpredictable ways, as the drama of the lockout unfolded. As the nineteenth century was drawing to a close, the Homestead Lockout dramatized the all-important question: Can the land of industry and technological innovation continue to be “the land of the free”? Can material progress, with its inevitable social and economic inequities, be made compatible with the American commitment to democracy for all? Twentieth-century history has demonstrated all too clearly the intesity of this dilemma. In addressing some of the thorniest issues of the last century, The Battle for Homestead demonstrates the enduring legacy and relevance of Homestead over a century later.