Paul Stronski is an independent scholar and lecturer who has taught at Stanford, George Mason, and George Washington universities. 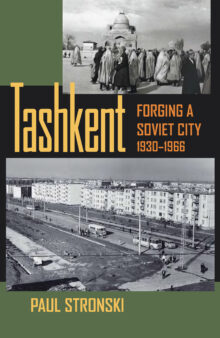 Paul Stronski tells the fascinating story of Tashkent, an ethnically diverse, primarily Muslim city that became the prototype for the Soviet-era reimagining of urban centers in Central Asia. Based on extensive research in Russian and Uzbek archives, Stronski shows us how Soviet officials, planners, and architects strived to integrate local ethnic traditions and socialist ideology into a newly constructed urban space and propaganda showcase. The Soviets planned to transform Tashkent from a “feudal city” of the tsarist era into a “flourishing garden,” replete with fountains, a lakeside resort, modern roadways, schools, hospitals, apartment buildings, and of course, factories. The city was intended to be a shining example to the world of the successful assimilation of a distinctly non-Russian city and its citizens through the catalyst of socialism. As Stronski reveals, the physical building of this Soviet city was not an end in itself, but rather a means to change the people and their society. Stronski analyzes how the local population of Tashkent reacted to, resisted, and eventually acquiesced to the cityÆs socialist transformation. He records their experiences of the Great Terror, World War II, StalinÆs death, and the developments of the Krushchev and Brezhnev eras up until the earthquake of 1966, which leveled large parts of the city. Stronski finds that the Soviets established a legitimacy that transformed Tashkent and its people into one of the more stalwart supporters of the regime through years of political and cultural changes and finally during the upheavals of glasnost.