Paul Werth joined the faculty of the University of Nevada, Las Vegas in 1997, after receiving his PhD at the University of Michigan in 1996, and is now Professor in the Department of History. In 2004-2005 he was visting fellow at the Slavic Research Center at the University of Hokkaido, Japan; a fellow at the National Humanities Center in Research Triangle Park, North Carolina in 2007-2008; and a visting fellow at the Center for Advanced study at Ludwig-Maximilians University in Munich, Germany in 2011. From 2009 until the summer of 2015 he served as one of the three editors of the journal Kritika: Explorations in Russian and Eurasian History. In 2013-14 he was chair of UNLV’s Faculty Senate, after that serving as chair of UNLV’s Promotion & Tenure Committee and then chair of its Department of History. Liberation from the latter post in mid-2017 has become a major highlight of his life. 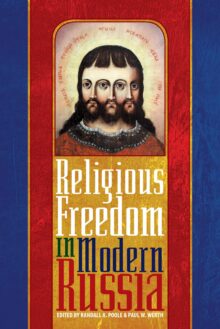 Despite Russia’s religiously diverse population and the strong connection between the Russian state and the Orthodox Chuch, the problem of religious freedom has been a driving force in the country’s history. This volume gathers leading scholars to provide an extensive exploration of the evolution, experience, and contested meanings of religious freedom in Russia from the early modern period to the present, with a particular focus on the nineteenth century. Addressing different spiritual traditions, clerics and revolutionaries, ideas and lived experience, Religious Freedom in Modern Russia explores the various meanings that religious freedom, toleration, and freedom of conscience had in Russia among nonstate sectors.