Peter Blanchard is professor emeritus of history at the University of Toronto and a member of the Conference on Latin American History. 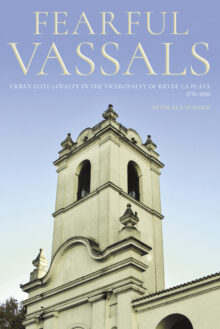 Following the creation of the viceroyalty of Río de la Plata in 1776, the elites of Buenos Aires, Córdoba, and Montevideo turned time and again to the Spanish crown for intercession, mediation, and support to maintain their privileged position during the tumultuous years before the May Revolution of 1810. Their loyalty was in part a result of the social status, political opportunities, and economic benefits that produced their privileged style of life. But of greater importance were the various internal and external factors that threatened their privileges, including inter-group rivalries, the presence of subversive ideas linked to the French Revolution, growing numbers of black slaves who engaged in various forms of resistance, indigenous groups who blocked the exploitation of the viceroyalty’s resources, Portuguese interlopers, and British imperial ambitions that culminated with the invasions of the viceroyalty in 1806 and 1807. To retain their privileges and their tenuous hold over the region, the viceroyalty’s urban elites looked to Spain for help, ensuring their continuing loyalty to the Spanish crown in increasingly troubling times. 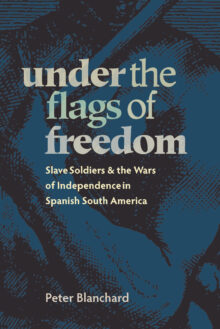 Under the Flags of Freedom

Slave Soldiers and the Wars of Independence in Spanish South America

During the wars for independence in Spanish South America (1808-1826), thousands of slaves enlisted under the promise of personal freedom and, in some cases, freedom for other family members. Blacks were recruited by opposing sides in these conflicts and their loyalties rested with whomever they believed would emerge victorious. The prospect of freedom was worth risking one's life for, and wars against Spain presented unprecedented opportunities to attain it.

Much hedging over the slavery issue continued, however, even after the patriots came to power. The prospect of abolition threatened existing political, economic, and social structures, and the new leaders would not encroach upon what were still considered the property rights of powerful slave owners. The patriots attacked the institution of slavery in their rhetoric, yet maintained the status quo in the new nations. It was not until a generation later that slavery would be declared illegal in all of Spain's former mainland colonies.

Through extensive archival research, Blanchard assembles an accessible, comprehensive, and broadly based study to investigate this issue from the perspectives of Royalists, patriots, and slaves. He examines the wartime political, ideological, and social dynamics that led to slave recruitment, and the subsequent repercussions in the immediate postindependence era. Under the Flags of Freedom sheds new light on the vital contribution of slaves to the wars for Latin American independence, which, up until now, has been largely ignored in the histories and collective memories of these nations. 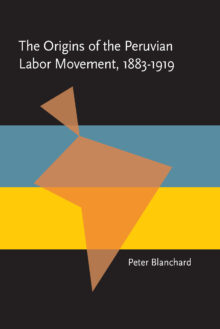 In January 1919 the Peruvian government issued a decree establishing the eight-hour work day&mdash;the culmination of thirty years of struggle by Peru’s works and evidence of the increasing influence of the labor movement in Peruvian politics and society.
Beginning in October 1883 at the time of Treaty of Ancón terminating four years of warfare with Chile, Peru’s workers started a thirty-year effort to become an active and influential sector of society. They formed organizations, actively participated in the nation’s political life, engaged in industrial agitation&mdash;all revealing a growing class consciousness and an ability to compel both employers and governments to respond to their demands. Blanchard’s analysis and insights into the economic factors underlying Peru’s labor unrest also extends to labor developments and the modernization process throughout Latin America.