Peter Thorsheim is Professor and Director of Graduate Studies in History at the University of North Carolina, Charlotte. He is the author of Waste into Weapons: Recycling in Britain during the Second World War, and Inventing Pollution: Coal, Smoke, and the Environment in Britain since 1800. 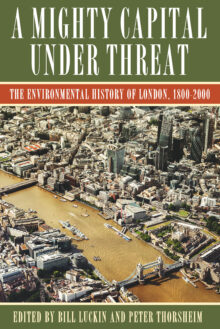 A Mighty Capital under Threat

Demographically, nineteenth-century London, or what Victorians called the “new Rome,” first equaled, then superseded its ancient ancestor. By the mid-eighteenth century, the British capital had already developed into a global city. Sustained by its enormous empire, between 1800 and the First World War London ballooned in population and land area. Nothing so vast had previously existed anywhere. A Mighty Capital under Threat investigates the environmental history of one of the world’s global cities and the largest city in the United Kingdom. Contributors cover the feeding of London, waste management, movement between the city’s numerous districts, and the making and shaping of the environmental sciences in the late nineteenth and early twentieth centuries.