Philip J. Funigiello is emeritus professor of history at William and Mary University. He is the author of several books, including Chronic Politics: Health Care Security from FDR to George W. Bush. 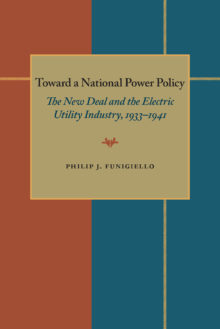 Toward a National Power Policy offers a comprehensive analysis of the conflict between Franklin D. Roosevelt's New Deal and the electric utility industry. Philip J. Funigiello outlines the origins and evolution of the privately owned industry, and the growth of an anti-monopoly movement in the 1920s. He details the four major areas of conflict between public and private interests: the Holding Company Act, the Rural Electrification Administration, the Bonneville Power Administration, and power planning for the second World War. Funigiello reveals the complexities of top-level policymaking and the networks of interpersonal relationships that led to both conflict and compromise, and concludes that the failure of the Roosevelt administration to develop a well-defined philosophy prevented the development of a national power policy.