Randy Roberts, professor of history at Purdue University, is the author or editor of fourteen books, including Pittsburgh Sports: Stories from the Steel City. He is the recipient of the Ray and Pat Browne Award from the Popular Culture Association. 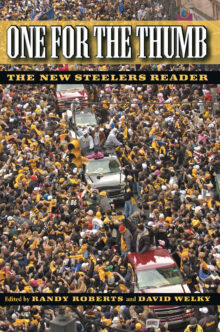 One for the Thumb

On February 5, 2006, the Pittsburgh Steelers joined the ranks of the elite teams in National Football League history, celebrating their fifth Super Bowl victory. From an unspectacular 7-5 start, to completing the greatest playoff run ever, to the fairy tale ending of Jerome Bettis's Hall of Fame career and the vindication of Bill Cowher's coaching tenure, the 2005 season was not only one for the thumb, but &ldquo;truly one for the ages.&rdquo;
One for the Thumb is a collection of the best writing about the fabled franchise by local and national sportswriters, and former players. It covers the team's history from Art Rooney Sr.'s purchase of the NFL franchise in 1933 for $2,500 to their Super Bowl XL victory. From their frustrating early days as the Pirates, Steagles, and Card-Pitts, through their four Super Bowl wins in the 1970s, to the fateful day in 2004 when they selected Ben Roethlisberger as the eleventh overall pick in the draft, One for the Thumb captures the essence of the team whose identity is forever linked with the spirit of the hardworking, blue-collar city it represents.
From immortals Bobby Layne, Ernie Stautner, and John Henry Johnson, to Chuck Noll, Terry Bradshaw, Mean Joe Greene, Rocky Bleier, and Neil O'Donnell, to current greats Troy Polamalu, Jerome Bettis, Ben Roethlisberger, and Bill Cowher, One for the Thumb is the definitive anthology of the Pittsburgh Steelers–a must-read for all fans of the team and the game of football. 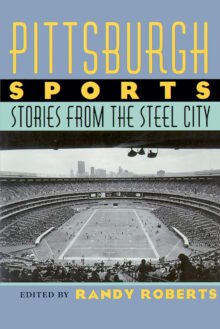 Stories From The Steel City

Summer afternoons at Forbes Field, playoff Sundays with the Steelers, winter nights at the Igloo cheering for Mario and the Penguins: Pittsburgh Sports captures all that and more. With stories from sports fans, historians, and former athletes, Pittsburgh Sports mixes personal experiences with team histories to capture the full range of what it means to be a sports fan&mdash;in Pittsburgh, or, by extension, anywhere.

A book that can be read cover-to-cover, or in bits and pieces, Pittsburgh Sports includes chapters on the ill-fated Pittsburgh Pipers, who won the American Basketball Association’s first championship, then folded four years later; the Pittsburgh Crawfords and the Homestead Grays, perennial Negro League powerhouses; Johnny Unitas, Joe Namath, Jim Kelly, Joe Montana, Dan Marino, and other legends of western Pennsylvania high school football; boxing’s illustrious past in the Iron City; football reminiscences by a former Steelers punter; and the ups and downs of the Pittsburgh Pirates.