Rina C. Youngner is an independent scholar of art history and has lectured at the University of Pittsburgh, Chatham College, and Carlow University. She was curator of The Artist Looks at Industrial Pittsburgh, 1838-1993 at the Henry Clay Frick Fine Arts Center. 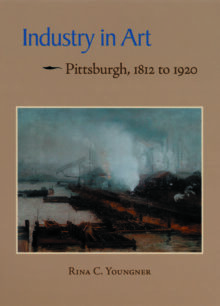 Industry in Art examines the artists, contexts, and societal factors that influenced the depiction of Pittsburgh industry and labor from the early nineteenth century to the early twentieth century through a variety of art forms that include illustration, painting, and graphic art. In the early nineteenth century, most fine artists avoided depicting industry, though David Gilmore Blythe and William C. Wall portrayed the environmental changes caused by industrial growth. By the last quarter of the century, however, national weekly magazines illustrated Pittsburgh’s smoking industrial complexes as symbols of industrial might populated by stoic, working-class heroes working with fire. Commercial artists created graphic images of modern technology for topographic prints, advertising, and national magazines that helped shape America’s perception of Pittsburgh as both an industrial giant and the “City of the Future.” Depictions in Harper’s Weekly and Frank Leslie’s Illustrated Newspaper renderings of the railroad strike of 1877 and the Homestead strike of 1892, and Joseph Stella’s and Lewis Hine’s portrayals of mill workers for the Pittsburgh Survey in the early twentieth century focused on industrial workers as angry strikers and as immigrants struggling to earn a living. It was not until the end of the century that industry became acceptable in high art, as the Carnegie Institute brought European art and artists to Pittsburgh with its yearly International exhibits and Aaron Gorson discovered the dramatic effect of steel mills at night. Industry in Art presents an in-depth analysis of how sociological elements affected both artists and imagery. As perceptions of industry changed over time, artists reflected and shaped America’s attitudes toward industry and labor in the nineteenth century.