Robert H. Kargon is the Willis K. Shepard Professor of the History of Science at Johns Hopkins University.
Karen Fiss is professor of visual studies and design at California College of the Arts.
Morris Low is associate professor of Japanese history at University of Queensland, Australia.
Arthur P. Molella is director of the Lemelson Center for the Study of Invention and Innovation, Smithsonian Institution. 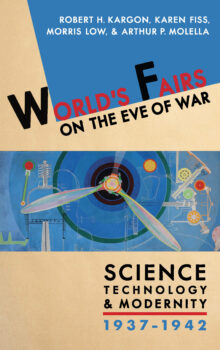 World’s Fairs on the Eve of War

Since the first world’s fair in London in 1851, at the dawn of the era of industrialization, international expositions served as ideal platforms for rival nations to showcase their advancements in design, architecture, science and technology, industry, and politics. Before the outbreak of World War II, countries competing for leadership on the world stage waged a different kind of war—with cultural achievements and propaganda—appealing to their own national strengths and versions of modernity in the struggle for power. World’s Fairs on the Eve of War examines five fairs and expositions from across the globe—including three that were staged (Paris, 1937; Dusseldorf, 1937; and New York, 1939-40), and two that were in development before the war began but never executed (Tokyo, 1940; and Rome, 1942). This coauthored work considers representations of science and technology at world’s fairs as influential cultural forces and at a critical moment in history, when tensions and ideological divisions between political regimes would soon lead to war.