Robert J. Gangewere is a former editor of Carnegie Magazine and adjunct professor of English at Carnegie Mellon University. He is the author or editor of several books, including The Bridges of Pittsburgh and Allegheny County and The Exploited Eden: Literature on the American Environment. 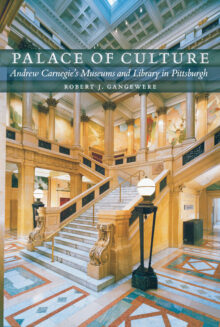 Andrew Carnegie is remembered as one of the worldÆs great philanthropists. As a boy, he witnessed the benevolence of a businessman who lent his personal book collection to laborerÆs apprentices. That early experience inspired Carnegie to create the “Free to the People” Carnegie Library in 1895 in Pittsburgh, Pennsylvania. In 1896, he founded the Carnegie Institute, which included a music hall, art museum, and science museum. Carnegie deeply believed that education and culture could lift up the common man and should not be the sole province of the wealthy. Today, his Pittsburgh cultural institution encompasses a library, music hall, natural history museum, art museum, science center, the Andy Warhol Museum, and the Carnegie International art exhibition.

In Palace of Culture, Robert J. Gangewere presents the first history of a cultural conglomeration that has served millions of people since its inception and inspired the likes of August Wilson, Andy Warhol, and David McCullough. In this fascinating account, Gangewere details the political turmoil, budgetary constraints, and cultural tides that have influenced the caretakers and the collections along the way. He profiles the many benefactors, trustees, directors, and administrators who have stewarded the collections through the years. Gangewere provides individual histories of the library, music hall, museums, and science center, and describes the importance of each as an educational and research facility.

Moreover, Palace of Culture documents the importance of cultural institutions to the citizens of large metropolitan areas. The Carnegie Library and Institute have inspired the creation of similar organizations in the United States and serve as models for museum systems throughout the world.