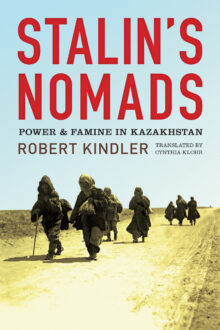 Power and Famine in Kazakhstan

Robert Kindler’s seminal work is a comprehensive and unsettling account of the Soviet campaign to forcefully sedentarize and collectivize the Kazakh clans. Viewing the nomadic life as unproductive, and their lands unused and untilled, Stalin and his inner circle pursued a campaign of violence and subjugation, rather than attempting any dialog or cultural assimilation. The results were catastrophic, as the conflict and an ensuing famine (1931-1933) caused the death of nearly one-third of the Kazakh population. Hundreds of thousands of nomads became refugees and a nomadic culture and social order were essentially destroyed in less than five years.

Kindler provides an in-depth analysis of Soviet rule, economic and political motivations, and the role of remote and local Soviet officials and Kazakhs during the crisis. This is the first English-language translation of an important and harrowing history, largely unknown to Western audiences prior to Kindler’s study.

The translation of this work was funded by Geisteswissenschaften International – Translation Funding for Work in the Humanities and Social Sciences from Germany, a joint initiative of the Fritz Thyssen Foundation, the German Federal Foreign Office, the collecting society VG WORT and the Börsenverein des Deutschen Buchhandels (German Publishers & Booksellers Association).