Robert L. Smale is assistant professor of history at the University of MissouriÐColumbia. 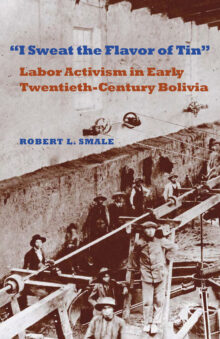 I Sweat the Flavor of Tin

On June 4, 1923, the Bolivian military turned a machine gun on striking miners in the northern Potosí town of Uncía. The incident is remembered as BoliviaÆs first massacre of industrial workers. The violence in Uncía highlights a formative period in the development of a working class who would eventually challenge the oligarchic control of the nation.Robert L. Smale begins his study as BoliviaÆs mining industry transitioned from silver to tin; specifically focusing on the region of Oruro and northern Potosí. The miners were part of a heterogeneous urban class alongside artisans, small merchants, and other laborers. Artisan mutual aid societies provided miners their first organizational models and the guidance to emancipate themselves from the mine ownersÆ political tutelage. During the 1910s both the WorkersÆ Labor Federation and the Socialist Party appeared in Oruro to spur more aggressive political action. In 1920 miners won a comprehensive contract that exceeded labor legislation debated in Congress in the years that followed. Relations between the working class and the government deteriorated soon after, leading to the 1923 massacre in Uncía. Smale ends his study with the onset of the Great Depression and premonitions of war with Paraguay&mdash;twin cataclysms that would discredit the old oligarchic order and open new horizons to the labor movement.This periodÆs developments marked the entry of workers and other marginalized groups into Bolivian politics and the acquisition of new freedoms and basic rights. These events prefigure the rise of Evo Morales&mdash;a union activist born in Oruro&mdash;in the early twenty-first century.