Rosalind L. Branning was professor of political science at the University of Pittsburgh, specializing in state government. She was a former officer of the American Political Science Association. 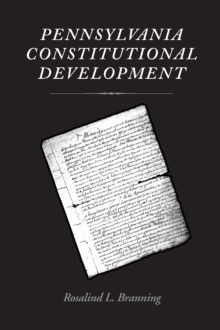 Pennsylvania Constitutional Development has proven to be the definitive study of the history of Pennsylvania’s constitution in its first four incarnations. Rosalind Branning’s critique, first published in 1960, reflects the movement that led to the constitution of 1968. After tracing the history of the 1776 constitution and its earliest revisions–in 1790 and 1838–Branning primarily focuses on the constitutional convention of 1872-73 and the resulting document of 1874, which endured for almost a century. She uses the published <I>Debates</I>, newspaper files, and the observations of contemporary writers and statesmen to provide a detailed and engaging study of the politics and leadership of the time. Her analysis demonstrates that this constitutional convention produced an instrument that was designed to meet nineteenth-century needs but would need significant revisions by future generations. Foreseeing the very issues that would be addressed in the 1967-68 constitutional convention, Branning identifies the elements that are necessary for successful constitutional lawmaking.
The evolution of Pennsylvania’s body of laws serves as a cogent example of the opportunities and foibles intrinsic to the process of defining effective governance of a state. Pennsylvania Constitutional Development remains an essential resource for students and historians, and should be read by anyone interested in the government of the Keystone State.