Ryan Black is the author of Death of a Nativist, winner of the 2016 Poetry Society of America Chapbook Fellowship, selected by Linda Gregerson. He has published previously or has work forthcoming in The Berkeley Poetry Review, Blackbird, Ninth Letter, Ploughshares, The Southern Review, and elsewhere, and has received fellowships from the Adirondack Center for Writing, The Millay Colony for the Arts, and the Queens Council on the Arts. He is the Director of Undergraduate Creative Writing at Queens College of the City University of New York, and lives in Jackson Heights. Learn more at https://ryanblackpoet.com/. 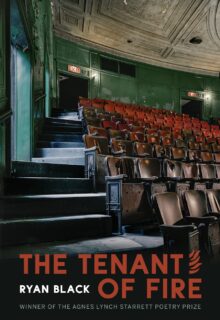 Tenant of Fire, The

The Tenant of Fire is about Queens, NY—its history, public and personal, real and imagined. Many of the people who populate this book—Irish Catholics, Italian-Americans—were once considered ethnic but now fall wholly under the banner of white. And from their anxieties a man like Donald Trump emerges. Born and raised in Queens, Trump is both the product and purveyor of a localized nativist politic.

The young white speaker of these poems works to record his parents’ and neighbors’, both white and of color, and his own attempts at navigating a shifting landscape. In poems on the homecoming of Vietnam vets, or the aftermath of Hurricane Sandy, or the firebombing of Malcolm X’s house, The Tenant of Fire explores how and why the plurality of a place like Queens, where now nearly two hundred languages are spoken, is viewed as a threat to national security.