Sarah Kanouse is an associate professor in the school of art and art history at the University of Iowa. 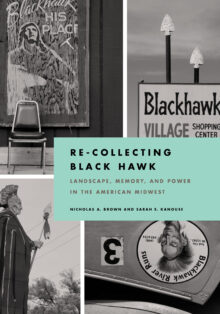 Landscape, Memory, and Power in the American Midwest

The name Black Hawk permeates the built environment in the upper Midwestern United States. It has been appropriated for everything from fitness clubs to used car dealerships. Makataimeshekiakiak, the Sauk Indian war leader whose name loosely translates to “Black Hawk,” surrendered in 1832 after hundreds of his fellow tribal members were slaughtered at the Bad Axe Massacre. Re-Collecting Black Hawk examines the phenomena of this appropriation in the physical landscape, and the deeply rooted sentiments it evokes among Native Americans and descendants of European settlers. Nearly 170 original photographs are presented and juxtaposed with texts that reveal and complicate the significance of the imagery. Contributors include tribal officials, scholars, activists, and others, such as George Thurman, the principal chief of the Sac and Fox Nation and a direct descendant of Black Hawk. These image-text encounters offer visions of both the past and present and the shaping of memory through landscapes that reach beyond their material presence into spaces of cultural and political power. As we witness, the evocation of Black Hawk serves as a painful reminder, a forced deference, and a veiled attempt to wipe away the guilt of past atrocities. Re-Collecting Black Hawk also points toward the future. By simultaneously unsettling and reconstructing the Midwestern landscape, Re-Collecting Black Hawk envisions new modes of peaceful and just coexistence and suggests alternative ways of inhabiting the landscape.