Scott B. Smith is associate professor of history at Linfield College. 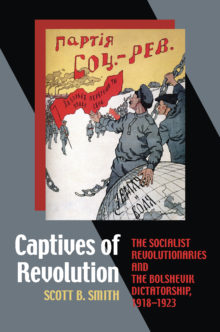 The Socialist Revolutionaries and the Bolshevik Dictatorship, 1918–1923

By Scott B. Smith

The Socialist Revolutionaries (SRs) were the largest political party in Russia in the crucial revolutionary year of 1917. Heirs to the legacy of the PeopleÆs Will movement, the SRs were unabashed proponents of peasant rebellion and revolutionary terror, emphasizing the socialist transformation of the countryside and a democratic system of government as their political goals. They offered a compelling, but still socialist, alternative to the Bolsheviks, yet by the early 1920s their party was shattered and its members were branded as enemies of the revolution. In 1922, the SR leaders became the first fellow socialists to be condemned by the Bolsheviks as “counter-revolutionaries” in the prototypical Soviet show trial. In Captives of the Revolution, Scott B. Smith presents both a convincing account of the defeat of the SRs and a deeper analysis of the significance of the political dynamics of the Civil War for subsequent Soviet history. Once the SRs decided to openly fight the Bolsheviks in 1918, they faced a series of nearly impossible political dilemmas. At the same time, the Bolsheviks fatally undermined the revolutionary credentials of the SRs by successfully appropriating the rhetoric of class struggle, painting a simplistic picture of Reds versus Whites in the Civil War, a rhetorical dominance that they converted into victory over the SRs and any left-wing alternative to Bolshevik dictatorship. In this narrative, the SRs became a bona fide threat to national security and enemies of the people&mdash;a characterization that proved so successful that it became an archetype to be used repeatedly by the Soviet leadership against any political opponents, even those from within the Bolshevik party itself. In this groundbreaking study, Smith reveals a more complex and nuanced picture of the postrevolutionary struggle for power in Russia than we have ever seen before and demonstrates that the Civil War&mdash;and in particular the struggle with the SRs&mdash;was the formative experience of the Bolshevik party and the Soviet state.