Scott Gates is director of the Centre for the Study of Civil War, International Peace Research Institute, Oslo, and professor of political science, Norwegian University of Science & Technology. He is the coauthor of several books, including Teaching, Tasks, and Trust: Functions of the Public Executive and Working, Shirking, and Sabotage: Bureaucratic Response to a Democratic Public. 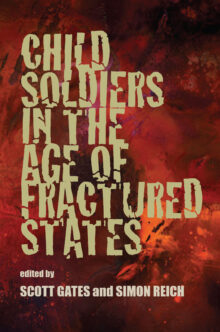 Child Soldiers in the Age of Fractured States

Current global estimates of children engaged in warfare range from 200,000 to 300,000. Children’s roles in conflict range from armed and active participants to spies, cooks, messengers, and sex slaves. Child Soldiers in the Age of Fractured States examines the factors that contribute to the use of children in war, the effects of war upon children, and the perpetual cycle of warfare that engulfs many of the world’s poorest nations.

The contributors also offer viable policies to reduce the recruitment of child soldiers such as the protection of refugee camps by outside forces, “naming and shaming,” and criminal prosecution by international tribunals. Finally, they focus on ways to reintegrate former child soldiers into civil society in the aftermath of war.