Shen Hou is assistant professor of world history at Renmin University of China, Beijing. She is a former postdoctoral fellow at Tsinghau University in Beijing, and research fellow at the Rachel Carson Center at LMU in Munich, Germany. 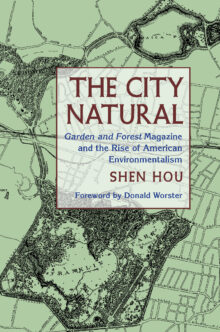 Garden and Forest Magazine and the Rise of American Environmentalism

The weekly magazine Garden and Forest existed for only nine years (1888-1897). Yet, in that brief span, it brought to light many of the issues that would influence the future of American environmentalism. In The City Natural, Shen Hou presents the first “biography” of this important but largely overlooked vehicle for individuals with the common goal of preserving nature in American civilization.

As Hou’s study reveals, Garden and Forest was instrumental in redefining the fields of botany and horticulture, while also helping to shape the fledgling professions of landscape architecture and forestry. The publication actively called for reform in government policy, urban design, and future planning for the preservation and inclusion of nature in cities. It also attempted to shape public opinion on these issues through a democratic ideal that every citizen had the right (and need) to access nature. These notions would anticipate the conservation and “city beautiful” movements that followed in the early twentieth century.

Hou explains the social and environmental conditions that led to the rise of reform efforts, organizations, and publications such as Garden and Forest. She reveals the intellectual core and vision of the magazine as a proponent of the city natural movement that sought to relate nature and civilization through the arts and sciences. Garden and Forest was a staunch advocate of urban living made better through careful planning and design. As Hou shows, the publication also promoted forest management and preservation, not only as a natural resource but as an economic one. She also profiles the editors and contributors who set the magazine’s tone and follows their efforts to expand America’s environmental expertise.

Through the pages of Garden and Forest, the early period of environmentalism was especially fruitful and optimistic; many individuals joined forces for the benefit of humankind and helped lay the foundation for a coherent national movement. Shen Hou’s study gives Garden and Forest its due and adds an important new chapter to the early history of American environmentalism.