Sondra Horton Fraleigh chairs the Department of Dance at the State University of New York, Brockport. She is the author of Dance and the Lived Body and co-editor (with Penelope Hanstein) of Researching Dance: Evolving Modes of Inquiry. Her articles have been published in texts on dance and movement, philosophy, and cognitive development. She has been a guest teacher of dance and somatic therapy in America, Japan, England, and Norway. She has served as president of the Congress of Research in Dance and is a Faculty Exchange Scholar for the State University of New York. Her innovative choreography has been seen on tour in America, Germany, and Japan, where she has also been a visiting scholar at several universities. 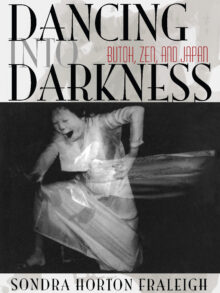 Dancing Into Darkness is Sondra Horton Fraleigh's chronological diary of her deepening understanding of and appreciation for this art form, as she moves from a position of aesthetic response as an audience member to that of assimilation as a student. As a student of Zen and butoh, Fraleigh witnesses her own artistic and personal transformation through essays, poems, interviews, and reflections spanning twelve years of study, much of it in Japan. Numerous performance photographs and original calligraphy by Fraleigh's Zen teacher Shodo Akane illuminate her words.
The pieces of Dancing Into Darkness cross boundaries, just as butoh anticipates a growing global amalgamation. “Butoh is not an aesthetic movement grafted onto Western dance, ” Fraleigh concludes, “and Western dance may be more Eastern than we have been able to see. “ 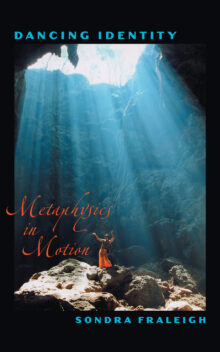 Combining critical analysis with personal history and poetry, Dancing Identity presents a series of interconnected essays composed over a period of fifteen years. Taken as a whole, these meditative reflections on memory and on the ways we perceive and construct our lives represent Sondra Fraleigh's journey toward self-definition as informed by art, ritual, feminism, phenomenology, poetry, autobiography, and-always-dance.
Fraleigh's brilliantly inventive fusions of philosophy and movement clarify often complex philosophical issues and apply them to dance history and aesthetics. She illustrates her discussions with photographs, dance descriptions, and stories from her own past in order to bridge dance with everyday movement. Seeking to recombine the fractured and bifurcated conceptions of the body and of the senses that dominate much Western discourse, she reveals how metaphysical concepts are embodied and presented in dance, both on stage and in therapeutic settings.
Examining the role of movement in personal and political experiences, Fraleigh reflects on her major influences, including Moshe Feldenkrais, Kazuo Ohno, and Twyla Tharp. She draws on such varied sources as philosophers Simone de Beauvoir and Martin Heidegger, the German expressionist dancer Mary Wigman, Japanese Butoh founder Tatsumi Hijikata, Hitler, the Bomb, Miss America, Balanchine, and the goddess figure of ancient cultures. Dancing Identity offers new insights into modern life and its reconfigurations in postmodern dance. 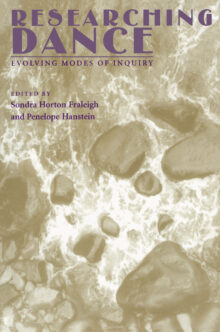 In Researching Dance, an introduction to research methods in dance addressed primarily to graduate students, the editors explore dance as evolutional, defining it in view of its intrinsic participatory values, its developmental aspects, and its purposes from art to ritual, and they examine the role of theory in research. The editors have also included essays by nine dancer-scholars who examine qualitative and quantitative inquiry and delineate the most common approaches for investigating dance, raising concerns about philosophy and aesthetics, historical scholarship, movement analysis, sexual and gender identification, cultural diversity, and the resources available to students. The writers have included study questions, research exercises, and suggested readings to facilitate the book’s use as a classroom text. 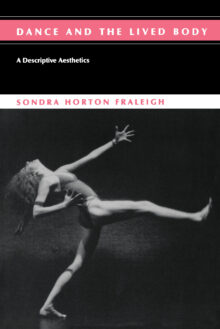 In her remarkable book, Sondra Horton Fraleigh examines and describes dance through her consciousness of dance as an art, through the experience of dancing, and through the existential and phenomenological literature on the lived body. She describes, with performance photographs, specific imagery in dance masterworks by Doris Humphrey, Anna Sokolow, Viola Farber, Nina Weiner, and Garth Fagan.