Stephanie Ryberg-Webster is an associate professor in the department of Urban Studies at Cleveland State University’s Levin College of Urban Affairs, where she also directs the Master of Urban Planning and Development program. 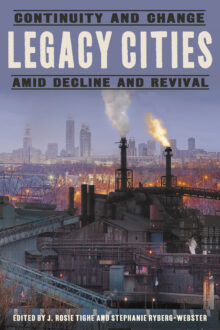 Continuity and Change amid Decline and Revival

Legacy cities, also commonly referred to as shrinking, or post-industrial cities, are places that have experienced sustained population loss and economic contraction. In the United States, legacy cities are those that are largely within the Rust Belt that thrived during the first half of the 20th century. In the second half of the century, these cities declined in economic power and population leaving a legacy of housing stock, warehouse districts, and infrastructure that is ripe for revitalization. This volume explores not only the commonalities across legacy cities in terms of industrial heritage and population decline, but also their differences. Legacy Cities poses the questions: What are the legacies of legacy cities? How do these legacies drive contemporary urban policy, planning and decision-making? And, what are the prospects for the future of these cities? Contributors primarily focus on Cleveland, Ohio, but all Rust Belt cities are discussed.