Stephen Peterson has worked as a teacher and screenwriter for the last ten years. He resides in Los Angeles, CA. 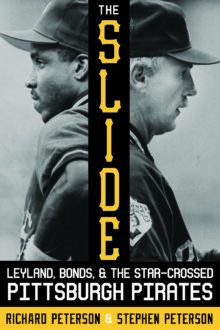 In the deciding game of the 1992 National League Championship Series against the Atlanta Braves, the Pittsburgh Pirates suffered the most dramatic and devastating loss in team history when former Pirate Sid Bream slid home with the winning run. Bream’s infamous slide ended the last game played by Barry Bonds in a Pirates uniform and sent the franchise reeling into a record twenty-season losing streak. The Slide tells the story of the myriad events, beginning with the aftermath of the 1979 World Series, which led to the fated 1992 championship game and beyond. It describes the city’s near loss of the team in 1985 and the major influence of Syd Thrift and Jim Leyland in developing a dysfunctional team into a division champion. The book gives detailed accounts of the 1990, 1991, and 1992 division championship seasons, the critical role played by Kevin McClatchy in saving the franchise in 1996, and summarizes the twenty losing seasons before the Pirates finally broke the curse of “the slide” in 2013, with their first playoff appearance since 1992.