Steve Lamos is assistant professor of English and an associate director of the Program for Writing and Rhetoric at the University of Colorado at Boulder. 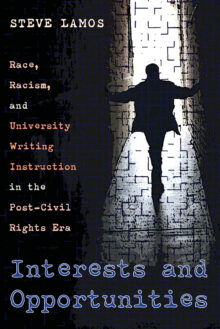 In the late 1960s, colleges and universities became deeply embroiled in issues of racial equality. To combat this, hundreds of new programs were introduced to address the needs of “high-risk” minority and low-income students. In the years since, university policies have flip-flopped between calls to address minority needs and arguments to maintain “Standard English.” Today, anti-affirmative action and anti-access sentiments have put many of these high-risk programs at risk.

In Interests and Opportunities, Steve Lamos chronicles debates over high-risk writing programs on the national level, and locally, at the University of Illinois at Urbana-Champaign. Using critical race theorist Derrick BellÆs concept of “interest convergence,” Lamos shows that these programs were promoted or derailed according to how and when they fit the interests of underrepresented minorities and mainstream whites (administrators and academics). He relates struggles over curriculum, pedagogy, and budget, and views their impact on policy changes and course offerings.

Lamos finds that during periods of convergence, disciplinary and institutional changes do occur, albeit to suit mainstream standards. In divergent times, changes are thwarted or undone, often using the same standards. To Lamos, understanding the past dynamics of convergence and divergence is key to formulating new strategies of local action and “story-changing” that can preserve and expand race-consciousness and high-risk writing instruction, even in adverse political climates.