Susan Buck-Morss is Jan Rock Zubrow Ô77 Chair of Social Sciences, and professor of political philosophy and social theory in the department of government at Cornell University. She is the author of Thinking Past Terror: Islamism and Critical Theory on the Left, Dreamworld and Catastrophe: The Passing of Mass Utopia in East and West, The Dialectics of Seeing: Walter Benjamin and the Arcades Project, and The Origin of Negative Dialectics: Theodor W. Adorno, Walter Benjamin, and the Frankfurt Institute. 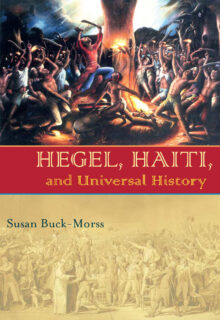 In this path-breaking work, Susan Buck-Morss draws new connections between history, inequality, social conflict, and human emancipation. Hegel, Haiti, and Universal History offers a fundamental reinterpretation of Hegel's master-slave dialectic and points to a way forward to free critical theoretical practice from the prison-house of its own debates.

Historicizing the thought of Georg Wilhelm Friedrich Hegel and the actions taken in the Haitian Revolution, Buck-Morss examines the startling connections between the two and challenges us to widen the boundaries of our historical imagination. She finds that it is in the discontinuities of historical flow, the edges of human experience, and the unexpected linkages between cultures that the possibility to transcend limits is discovered. It is these flashes of clarity that open the potential for understanding in spite of cultural differences. What Buck-Morss proposes amounts to a “new humanism,” one that goes beyond the usual ideological implications of such a phrase to embrace a radical neutrality that insists on the permeability of the space between opposing sides and as it reaches for a common humanity.