Thomas C. Lassman is curator of the post-World War II rocket and missile collection at the National Air and Space Museum, Smithsonian Institution. He previously worked at the U.S. Army Center of Military History and the Center for History of Physics at the American Institute of Physics. He was born and raised in Pittsburgh, Pennsylvania. 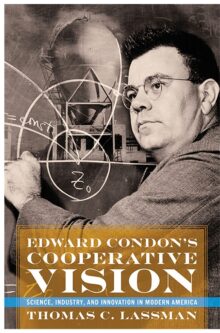 Born in 1902, Edward Condon made significant contributions to quantum theoretical physics. Nearly ten years at Princeton University sealed his reputation as a leading figure in the field. Then, in 1937, he gave it all up to pursue an industrial career, first at the Westinghouse Electric and Manufacturing Company, and then, by way of the federal government, the National Bureau of Standards. In a radical departure from professional norms, Condon sought to redefine the relationship between academic science and technological innovation in industry. He envisioned intimate cooperation with the universities to serve the needs of his employers and also the broader business community. This book explores the birth, life, and death of that vision during the Great Depression, World War II, and the early Cold War. Condon’s cooperative model of R&D evolved over time, and by consequence, laid bare sharp disagreements among academic, corporate, and government stakeholders about the practical value of new knowledge, where and how it should be produced, and ultimately, on whose behalf it ought to be put to use.