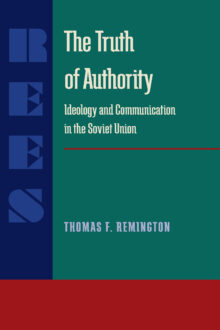 The Truth of Authority

Ideology and Communication in the Soviet Union

Thomas Remington discusses the methods used by the Communist Party to manage communications in Soviet society. Covering literature produced by Soviet scholars from the 1970s and 1980s, that studies the organization, content, usage, and impact of propaganda, Remington views how Party officials intrinsically manage the structure of the Soviet communications system, through rhetoric of both conservatism and reform.

Remington profiles the Bolshevik project of social transformation and political centralization known as War Communism. He argues that the effort to institute a centrally planned and administered economy shaped the ideology of the regime, the relations between the regime and the working class, and the character of state power.