Thomas Rickert is associate professor of English at Purdue University and author of Acts of Enjoyment: Rhetoric, Zizek, and the Return of the Subject, winner of the 2007 JAC Gary A. Olson Award. 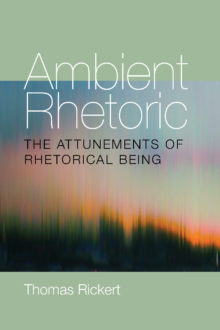 The Attunements of Rhetorical Being

In Ambient Rhetoric, Thomas Rickert seeks to dissolve the boundaries of the rhetorical tradition and its basic dichotomy of subject and object. With the advent of new technologies, new media, and the dispersion of human agency through external information sources, rhetoric can no longer remain tied to the autonomy of human will and cognition as the sole determinants in the discursive act.

Rickert develops the concept of ambience in order to engage all of the elements that comprise the ecologies in which we exist. Culling from Martin Heidegger’s hermeneutical phenomenology in Being and Time, Rickert finds the basis for ambience in Heidegger’s assertion that humans do not exist in a vacuum; there is a constant and fluid relation to the material, informational, and emotional spaces in which they dwell. Hence, humans are not the exclusive actors in the rhetorical equation; agency can be found in innumerable things, objects, and spaces. As Rickert asserts, it is only after we become attuned to these influences that rhetoric can make a first step toward sufficiency.

Rickert also recalls the foundational Greek philosophical concepts of kairos (time), chora (space/place), and periechon (surroundings) and cites their repurposing by modern and postmodern thinkers as “informational scaffolding” for how we reason, feel, and act. He discusses contemporary theory in cognitive science, rhetoric, and object-oriented philosophy to expand his argument for the essentiality of ambience to the field of rhetoric. Rickert then examines works of ambient music that incorporate natural and artificial sound, spaces, and technologies, finding them to be exemplary of a more fully resonant and experiential media.

In his preface, Rickert compares ambience to the fermenting of wine&mdash;how its distinctive flavor can be traced to innumerable factors, including sun, soil, water, region, and grape variety. The environment and company with whom it’s consumed further enhance the taste experience. And so it should be with rhetoric&mdash;to be considered among all of its influences. As Rickert demonstrates, the larger world that we inhabit (and that inhabits us) must be fully embraced if we are to advance as beings and rhetors within it.

Rhetoric, Zizek, and the Return of the Subject

Why are today's students not realizing their potential as critical thinkers? Although educators have, for two decades, incorporated contemporary cultural studies into the teaching of composition and rhetoric, many students lack the powers of self-expression that are crucial for effecting social change. Acts of Enjoyment presents a critique of current pedagogies and introduces a psychoanalytical approach in teaching composition and rhetoric. Thomas Rickert builds upon the advances of cultural studies and its focus on societal trends and broadens this view by placing attention on the conscious and subconscious thought of the individual. By introducing the cultural theory work of Slavoj Zizek, Rickert seeks to encourage personal and social invention–rather than simply following a course of unity, equity, or consensus that is so prevalent in current writing instruction. He argues that writing should not be treated as a simple skill, as a nau00efve self expression, or as a tool for personal advancement, but rather as a reflection of social and psychical forces, such as jouissance (enjoyment/sensual pleasure), desire, and fantasy-creating a more sophisticated, panoptic form. The goal of the psychoanalytical approach is to highlight the best pedagogical aspects of cultural studies to allow for well-rounded individual expression, ultimately providing the tools necessary to address larger issues of politics, popular culture, ideology, and social transformation.