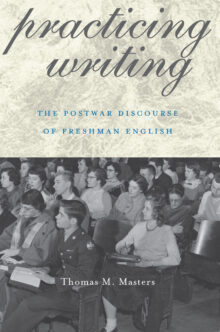 The Postwar Discourse of Freshman English

Practicing Writing examines a pivotal era in the history of the most ubiquitous-and possibly most problematic-course in North American colleges and universities: the requireAd first-year writing course generally known as “freshman English.” Thomas Masters's focus is the mid-twentieth century, beginning with the returning waves of World War II veterans attending college on the GI Bill. He then traces the education reforms that took place in the late 1950s after the launch of Sputnik and the establishment of composition as a separate discipline in 1963. This study draws upon archives at three midwestern schools that reflect a range of higher education options: Wheaton, a small, sectarian liberal arts college; Northwestern, a large private university; and Illinois, a large public university.Practicing Writing gives voice to those whose work is often taken for granted or forgotten in other studies of the subject: freshman English students and their instructors. Masters examines students' papers, professors' letters, and course descriptions, and draws upon interviews conducted with teachers to present the practitioners' points of view.Unlike other studies of the subject, which have tended to focus more on the philosophy, theory, and ideology of teaching composition and rhetoric, Masters reveals freshman English to be a practice-based phenomenon with a durable ideological apparatus. By reexamining texts that had previously been considered insignificant, he reveals the substance of first-year composition courses and the reasons for their durability.