Thomas Mellon was a distinguished and highly successful Pittsburgh entrepreneur, judge, and banker. Two of his sons, Andrew William and Richard Beatty, were to join Henry Ford and John D. Rockefeller as the four wealthiest men in the United States. 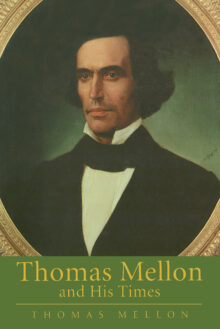 Thomas Mellon And His Times

In 1885, at the age of seventy-two and “in the evening of life,” Thomas Mellon published his autobiography in a limited edition exclusively for his family. He was a distinguished and highly successful Pittsburgh entrepreneur, judge, and banker, and his descendants would play major roles in American business, art, and philanthropy. Two of his sons, Andrew William and Richard Beatty, were to join Henry Ford and John D. Rockefeller as the four wealthiest men in the United States. Thomas Mellon was an anomaly among the great American capitalists of his time. Highly literate and intelligent, astute and deadly honest about his own life and financial success, and an excellent narrative writer with a chilly but genuine sense of humor, he wrote a perspective and self-revealing book that remains to this day a major autobiography and an important source for American social and business history. That it has found very few readers in the 114 year since its publication is due to the author himself. Warning his descendants in the preface that the book should never “be for sale in the bookstore, nor any new edition published,” because it contains “nothing which concerns the public to know, and much which if writing for it I would have omitted,” Thomas in effect buried a masterpiece. Nor in later years has it ever been generally available. An abridged version was prepared solely for the Mellon family in 1968, and the book also appeared years ago in an obscure fascimile. Until the University of Pittsburgh Press edition, Thomas Mellon and His Times has been virtually unobtainable. Born in Ulster with a Scotch-Irish heritage, Thomas Mellon immigrated to the United States in 1818 at the age of five. He was raised by his parents on a small, hilly farm at Poverty Point, about twenty miles east of Pittsburgh. When he was nine, he walked to Pittsburgh and, awe-struck, viewed the mansion and steam mill of the Negley family, “impressed . . . with an idea of wealth and magnificence I had before no conception of.” Yet the true turning point of his life was a decision he made at the age of seventeen. For years his father, Andrew, had insisted that Thomas become a farmer. One summer day in 1831, leaving his son cutting timber, Andrew rode to the county seat to close on the purchase of an adjoining farm which he intended for Thomas. “Nearly crazed” by the impending collapse of all hope of “acquiring knowledge and wealth,” Thomas threw down his axe and ran ten miles to stop the purchase. From this spontaneous decision flowed his later success as a judge, banker, and capitolist who caught the exhilarating tide of the American economy in the second half of the nineteenth century. For this new edition of the book, Paul Mellon, Thomas Mellon’s grandson, has written a preface, and David McCullough, winner of the Pulitzer Prize for his biography of Harry S. Truman, has contributed a foreword. The introduction, notes, and afterword by Mary L, Briscoe, Professor of English at the University of Pittsburgh and editor of American Autobiography, 1945-1980, provide the historical and social context for the autobiography. The book is illustrated with three maps and approximately twenty-five photographs, many of them rarely seen, from a variety of sources that includes Paul Mellon and other members of the Mellon family.