Thomas P. Miller is associate provost for faculty affairs at the University of Arizona in Tucson. He is the author of The Formation of College English: Rhetoric and Belles Lettres in the British Cultural Provinces, a winner of the Mina P. Shaughnessy Prize. 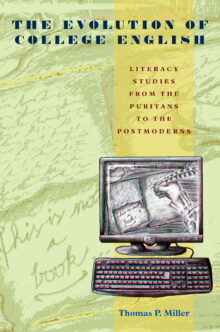 The Evolution of College English

Literacy Studies from the Puritans to the Postmoderns

Thomas P. Miller defines college English studies as literacy studies and examines how it has evolved in tandem with broader developments in literacy and the literate. He maps out “four corners” of English departments: literature, language studies, teacher education, and writing studies. Miller identifies their development with broader changes in the technologies and economies of literacy that have redefined what students write and read, which careers they enter, and how literature represents their experiences and aspirations.

Miller locates the origins of college English studies in the colonial transition from a religious to an oratorical conception of literature. A belletristic model of literature emerged in the nineteenth century in response to the spread of the “penny” press and state-mandated schooling. Since literary studies became a common school subject, professors of literature have distanced themselves from teachers of literacy. In the Progressive era, that distinction came to structure scholarly organizations such as the MLA, while NCTE was established to develop more broadly based teacher coalitions. In the twentieth century New Criticism came to provide the operating assumptions for the rise of English departments, until those assumptions became critically overloaded with the crash of majors and jobs that began in 1970s and continues today.

For models that will help the discipline respond to such challenges, Miller looks to comprehensive departments of English that value studies of teaching, writing, and language as well as literature. According to Miller, departments in more broadly based institutions have the potential to redress the historical alienation of English departments from their institutional base in work with literacy. Such departments have a potentially quite expansive articulation apparatus. Many are engaged with writing at work in public life, with schools and public agencies, with access issues, and with media, ethnic, and cultural studies. With the privatization of higher education, such pragmatic engagements become vital to sustaining a civic vision of English studies and the humanities generally. 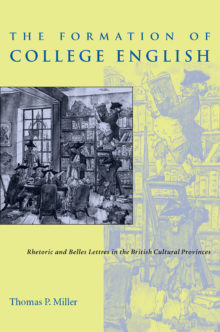 The Formation of College English

Rhetoric and Belles Lettres in the British Cultural Provinces

In the middle of the eighteenth century, English literature, composition, and rhetoric were introduced almost simultaneously into colleges throughout the British cultural provinces. Professorships of rhetoric and belles lettres were established just as print was reaching a growing reading public and efforts were being made to standardize educated taste and usage. The provinces saw English studies as a means to upward social mobility through cultural assimilation. In the educational centers of England, however, the introduction of English represented a literacy crisis brought on by provincial institutions that had failed to maintain classical texts and learned languages.
Today, as rhetoric and composition have become reestablished in the humanities in American colleges, English studies are being broadly transformed by cultural studies, community literacies, and political controversies. Once again, English departments that are primarily departments of literature see these basic writing courses as a sign of a literacy crisis that is undermining the classics of literature. The Formation of College English reexamines the civic concerns of rhetoric and the politics that have shaped and continue to shape college English.