Thomas E. Starzl is Distinguished Service Professor of Surgery at the University of Pittsburgh School of Medicine. Among his numerous international awards and honors, Starzl is the recipient of the 2012 Lasker-DeBakey Clinical Medical Research Award for his pioneering work in the field of liver transplantation. He has presided over both the International Transplant Society and the American Society of Transplant Surgeons. In 1987 Starzl founded the Transplant Recipients International Organization, and is donating the royalties from the sale of The Puzzle People to this and other charities. 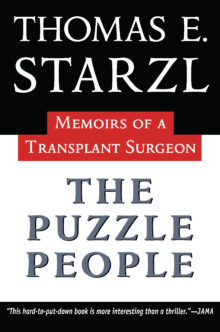 Memoirs Of A Transplant Surgeon

Given the tensions and demands of medicine, highly successful physicians and surgeons rarely achieve equal success as prose writers. It is truly extraordinary that a major, international pioneer in the controversial field of transplant surgery should have written a spellbinding, and heart-wrenching, autobiography.
Thomas Starzl grew up in LeMars, Iowa, the son of a newspaper publisher and a nurse. His father also wrote science fiction and was acquainted with the writer Ray Bradbury. Starzl left the family business to enter Northwestern University Medical School where he earned both and M.D. and a PhD. While he was a student, and later during his surgical internship at the Johns Hopkins Hospital, he began the series of animal experiments that led eventually to the world’s first transplantation of the human liver in 1963.
Throughout his career, first at the University of Colorado and then at the University of Pittsburgh, he has aroused both worldwide admiration and controversy. His technical innovations and medical genius have revolutionized the field, but Starzl has not hesitated to address the moral and ethical issues raised by transplantation. In this book he clearly states his position on many hotly debated issues including brain death, randomized trials for experimental drugs, the costs of transplant operations, and the system for selecting organ recipients from among scores of desperately ill patients.
There are many heroes in the story of transplantation, and many “puzzle people,” the patients who, as one journalist suggested, might one day be made entirely of various transplanted parts. They are old and young, obscure and world famous. Some have been taken into the hearts of America, like Stormie Jones, the brave and beautiful child from Texas. Every patient who receives someone else’s organ – and Starzl remembers each one – is a puzzle. “It was not just the acquisition of a new part,” he writes. “The rest of the body had to change in many ways before the gift could be accepted. It was necessary for the mind to see the world in a different way.” The surgeons and physicians who pioneered transplantation were also changed: they too became puzzle people. “Some were corroded or destroyed by the experience, some were sublimated, and none remained the same.”