Till Mostowlansky is a postdoctoral fellow at the Hong Kong Institute for the Humanities and Social Sciences at The University of Hong Kong, and a research associate at the Universities of Bern and Sussex. 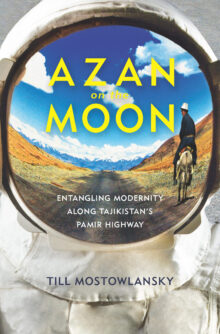 Azan on the Moon

Azan on the Moon is an in-depth anthropological study of people's lives along the Pamir Highway in eastern Tajikistan. Constructed in the 1930s in rugged high-altitude terrain, the road fundamentally altered the material and social fabric of this former Soviet outpost on the border with Afghanistan and China. The highway initially brought sentiments of disconnection and hardship, followed by Soviet modernization and development, and ultimately a sense of distinction from bordering countries and urban centers that continues to this day. Based on extensive fieldwork and through an analysis of construction, mobility, technology, media, development, Islam, and the state, Till Mostowlansky shows how ideas of modernity are both challenged and reinforced in contemporary Tajikistan. In the wake of China's rise in Central Asia, people along the Pamir Highway strive to reconcile a modern future with a modern past. Weaving together the road, a population, and a region, Azan on the Moon presents a rich ethnography of global connections.