Timothy M. Gill is assistant professor of sociology in the Department of Sociology at the University of Tennessee–Knoxville. 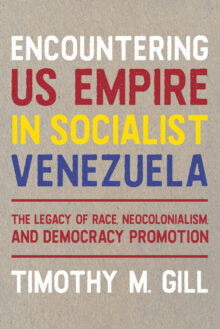 Encountering US Empire in Socialist Venezuela

The Legacy of Race, Neo-Colonialism, and Democracy Promotion

Since the end of World War II, the United States has come to dominate the world economically and politically, leading many to describe the United States as an empire. Scholars have analyzed how the US government has worked through international financial institutions, its Central Intelligence Agency, and outright warfare to achieve its will. In this book, Timothy M. Gill spotlights how the US government also worked through democracy promotion to undermine governments abroad, including in Venezuela. President Hugo Chávez, who ruled from 1999 until his death in 2013, was among the democratically elected Latin American state leaders who embraced socialism and challenged the idea of US global power. Gill shows how US government agencies funded and trained opposition parties and activists, and how such intervention often was justified in neocolonial and racist terms. Through analysis of documents obtained through Freedom of Information Act requests, embassy cables, and interviews with US government and Venezuelan nonprofit members, Gill details such operations and the imperial thinking behind them.