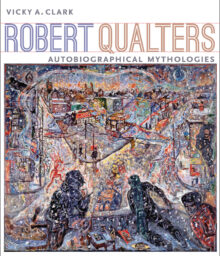 By Vicky A. Clark

Teeming with convulsive energy, raw brush strokes, and Fauvist colors, the paintings of Robert Qualters reflect the multifaceted and kinetic spirit of the artist himself. In these pages, the art historian Vicky A. Clark presents the first in-depth study of the art and life of this iconic Pittsburgh artist. Complemented by over eighty color images, Clark follows Qualters’s development from early childhood sketches through his recent autobiographical work. As she reveals, Qualters is truly a quotidian raconteur, who infuses allegory, narrative, and memory into his paintings of urban landscapes, neighborhoods, lunch counters, and amusement parks. Here, we witness coming of age and sexuality, economic hardship, working-class identities, death and rebirth, and many other themes, both personal and universal.

As Clark shows, Qualters’s oeuvre is the culmination of a lifelong artistic journey, recalling a host of influences from Japanese prints to Matisse, Bruegel, and Rembrandt. Throughout his career, and despite the popularity of his contemporaries, many of whom adopted abstract painting, Qualters has maintained a distinctly representational style, keeping a close link to his audience through the power of visual storytelling.

Robert Qualters was named Pennsylvania Artist of the Year for 2014, part of the Governor’s Awards for the Arts in Pennsylvania, sponsored by the Pennsylvania Council on the Arts.