Virgil Suárez is the author of four novels, a collection of stories, two memoirs, and eight poetry collections, and he has coedited two anthologies with his wife, Delia Poey. Most recently he has published an anthology of Latino poetry titled Paper Dance. Suárez is the recipient of a fellowship in poetry from the National Endowment for the Arts and a recipient of a Florida State Arts Grant. 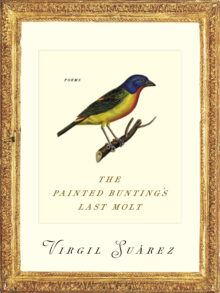 The Painted Bunting’s Last Molt explores fatherhood, parenting, and separation anxiety; and the ways in which time and memory are both a prison and a giver of joy. Fifteen years in the making, Virgil Suárez’s new collection uses his mother’s return to Cuba after 50 years of exile as a catalyst to muse on familial relationships, death, and the passing of time.
Moon Decima
If it were the Eucharist, it’d be hard to swallow,
this moon of lost impressions, a boy in deep water,
something tickling his skin. This memory of weight-
lessness—a kite that somehow still manages to hover
in the dog mouth blackness of sky. This is a cut out
moon of lost children, or is it a savior’s moon?
This boy will float on home, or be swallowed
by the water. Above the pines and mangroves,
this moon hangs unrelenting. Is it the one eye
of an indifferent God that remains open just so? 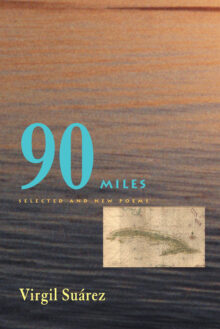 Ninety miles separate Cuba and Key West, Florida. Crossing that distance, thousands of Cubans have lost their lives. For Cuban American poet Virgil Suárez, that expanse of ocean represents the state of exile, which he has imaginatively bridged in over two decades of compelling poetry.
“Whatever isn't voiced in time drowns,” Suárez writes in “River Fable,” and the urgency to articulate the complex yearnings of the displaced marks all the poems collected here. 90 Miles contains the best work from Suárez's six previous collections: You Come Singing, Garabato, In the Republic of Longing, Palm Crows, Banyan, and Guide to the Blue Tongue, as well as important new poems.
At once meditative, confessional, and political, Suárez's work displays the refracted nature of a life of exile spent in Cuba, Spain, and the United States. Connected through memory and desire, Caribbean palms wave over American junk mail. Cuban mangos rot on Miami hospital trays. William Shakespeare visits Havana. And the ones who left Cuba plant trees of reconciliation with the ones who stayed.
Courageously prolific, Virgil Suárez is one of the most important Latino writers of his generation.