Virginia K. Bartlett is the author of Pickles and Pretzels: Pennsylvania’s World of Food, published by the University of Pittsburgh Press in 1980. She lives in Hingham, Massachusetts. 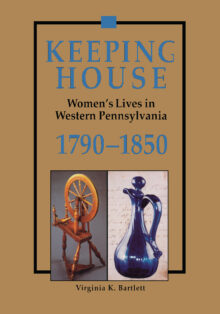 This book is a fascinating re-creation of the lives of women in the time of great social change that followed the end of the French and Indian War in western Pennsylvania. Many decades passed before a desolate and violent frontier was transformed into a stable region of farms and towns. Keeping House: Women’s Lives in Western Pennsylvania, 1790-1850 tells how the daughters, wives, and mothers who crossed the Allegheny Mountains responded and adapted to unaccustomed physical and psychological hardships as they established lives for themselves and their families in their new homes.
Intrigued by late eighteenth and early nineteenth-century manuscript cookbooks in the collection of the Historical Society of Western Pennsylvania, Virginia Bartlett wanted to find out more about women living in the region during that period. Quoting from journals, letters, cookbooks, travelers’ accounts – approving and critical – memoirs, documents, and newspapers, she offers us voices of women and men commenting seriously and humorously on what was going on around them.
The text is well-illustrated with contemporaneous art– engravings, apaintings, drawings, and cartoons. Of special interest are color and black-and-white photographs of furnishings, housewares, clothing, and portraits from the collections of the Historical Society of Western Pennsylvania.
This is not a sentimental account. Bartlett makes clear how little say women had about their lives and how little protection they could expect from the law, especially on matters relating to property. Their world was one of marked contrasts: life in a log cabin with bare necessities and elegant dinners in the homes of Pittsburgh’s military and entrepreneurial elite; rural women in homespun and affluent Pittsburgh ladies in imported fashions. When the book begins, families are living in fear of Indian attacks; as it ends, the word “shawling” has come into use as the polite term for pregnancy, referring to women’s attempt to hide their condition with cleverly draped shawls. The menacing frontier has given way to American-style gentility.
An introduction by Jack D. Warren, University of Virginia, sets the scene with a discussion of the early peopling of the region and places the book within the context of women’s studies.