Wiktor Marzec is an assistant professor and project leader in the Robert Zajonc Institute for Social Studies, University of Warsaw, Poland. Currently, he runs a comparative project on political trajectories of the late tsarist borderlands. 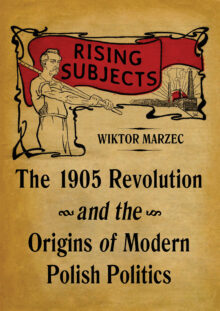 The 1905 Revolution and the Origins of Modern Polish Politics

Rising Subjects explores the change of the public sphere in Russian Poland during the 1905 Revolution. The 1905 Revolution was one of the few bottom-up political transformations and general democratizations in Polish history. It was a popular rebellion fostering political participation of the working class. The infringement of previously carefully guarded limits of the public sphere triggered a powerful conservative reaction among the commercial and landed elites, and frightened the intelligentsia. Polish nationalists promised to eliminate the revolutionary “anarchy” and gave meaning to the sense of disappointment after the revolution.

This study considers the 1905 Revolution as a tipping point for the ongoing developments of the public sphere. It addresses the question of Polish socialism, nationalism, and antisemitism. It demonstrates the difficulties in using the class cleavage for democratic politics in a conflict-ridden, multiethnic polity striving for an irredentist self-assertion against the imperial power.