William C. Barnett is associate professor and chair of the History Department at North Central College in Naperville, Illinois. 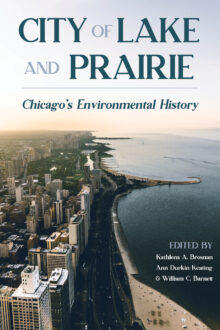 City of Lake and Prairie

Known as the Windy City and the Hog Butcher to the World, Chicago has earned a more apt sobriquet—City of Lake and Prairie—with this compelling, innovative, and deeply researched environmental history. Sitting at the southwestern tip of Lake Michigan, one of the largest freshwater bodies in the world, and on the eastern edge of the tallgrass prairies that fill much of the North American interior, early residents in the land that Chicago now occupies enjoyed natural advantages, economic opportunities, and global connections over centuries, from the Native Americans who first inhabited the region to the urban dwellers who built a metropolis in the nineteenth and twentieth centuries. As one millennium ended and a new one began, these same features sparked a distinctive Midwestern environmentalism aimed at preserving local ecosystems. Drawing on its contributors’ interdisciplinary talents, this volume reveals a rich but often troubled landscape shaped by communities of color, workers, and activists as well as complex human relations with industry, waterways, animals, and disease.