William DeGenaro is assistant professor of rhetoric and composition at the University of Michigan, Dearborn. 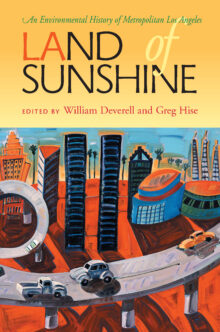 Most people equate Los Angeles with smog, sprawl, forty suburbs in search of a city-the great “what-not-to-do” of twentieth-century city building. But there's much more to LA's story than this shallow stereotype. History shows that Los Angeles was intensely, ubiquitously planned. The consequences of that planning-the environmental history of urbanism–is one place to turn for the more complex lessons LA has to offer.
Working forward from ancient times and ancient ecologies to the very recent past, Land of Sunshine is a fascinating exploration of the environmental history of greater Los Angeles. Rather than rehearsing a litany of errors or insults against nature, rather than decrying the lost opportunities of “roads not taken,” these essays, by nineteen leading geologists, ecologists, and historians, instead consider the changing dynamics both of the city and of nature.
In the nineteenth century, for example, “density” was considered an evil, and reformers struggled mightily to move the working poor out to areas where better sanitation and flowers and parks “made life seem worth the living.”
We now call that vision “sprawl,” and we struggle just as much to bring middle-class people back into the core of American cities. There's nothing natural, or inevitable, about such turns of events. It's only by paying very close attention to the ways metropolitan nature has been constructed and construed that meaningful lessons can be drawn. History matters.
So here are the plants and animals of the Los Angeles basin, its rivers and watersheds. Here are the landscapes of fact and fantasy, the historical actors, events, and circumstances that have proved transformative over and over again. The result is a nuanced and rich portrait of Los Angeles that will serve planners, communities, and environmentalists as they look to the past for clues, if not blueprints, for enhancing the quality and viability of cities.