Yevette Richards received a Ph.D. in American Studies from Yale University. Her areas of interest include labor, African American, and women’s histories. She has published the book Maida Springer: Pan-Africanist and International Labor Leader as well as articles in the International Journal of African Historical Studies and the Journal of Women’s History. 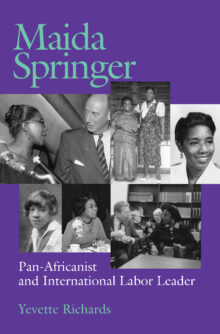 Maida Springer was an active participant in shaping a history that involved powerful movements for social, political and economic equality and justice for workers women, and African Americans. Maida Springer is the first full-length biography to document and analyze the central role played by Springer in international affairs, particularly in the formation of AFL-CIO’s African policy during the Cold War and African independence movements.

Richards explores the ways in which pan-Africanism, racism, sexism and anti-Communism affected Springer’s political development, her labor activism, and her relationship with labor leaders in the AFL-CIO, the International Confederation of Free Trade Unions (ICFTU), and in African unions. Springer’s life experiences and work reveal the complex nature of black struggles for equality and justice. A strong supporter of both the AFL-CIO and the ICFTU, Springer nonetheless recognized that both organizations were fraught with racism, sexism, and ethnocentrism. She also understood that charges of Communism were often used as a way to thwart African American demands for social justice. As an African-American, she found herself in the unenviable position of promoting to Africans the ideals of American democracy from which she was excluded from fully enjoying. 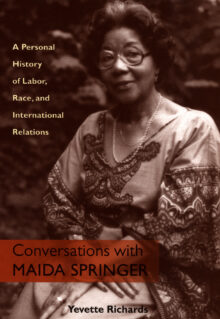 A Personal History Of Labor, Race, and International Relations

Born in Panama in 1910, Maida Springer grew up in Harlem. While still a young girl she learned firsthand of the bleak employment options available to African American females of her time. After one employer closed his garment shop and ran off with the workers’ wages in the midst of the Depression, Springer joined Local 22 of the International Ladies’ Garment Workers’ Union.This proved to be the first step in a remarkable advancement through the ranks of labor leadership positions that were typically dominated by white men. Ultimately, Springer became one of the AFL-CIO’s most important envoys to emerging African nations, earning her the nickname “Mama Maida” throughout that continent.In this brilliantly edited collection of interviews, Yevette Richards allows Springer to tell her story in her own words. The result is a rare glimpse into the private struggles and thoughts behind one of the twentieth century’s most fascinating international labor leaders.