Zachary J. S. Falck, Ph.D. is a historian who resides in Pittsburgh, PA. 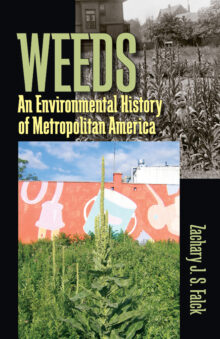 An Environmental History of Metropolitan America

As long as humans have existed, theyÆve worked and competed with plants to shape their surroundings. As cities developed and expanded, their diverse spaces were covered with and colored by weeds. In Weeds, Zachary J. S. Falck presents a comprehensive history of “happenstance plants” in American urban environments. Beginning in the late nineteenth century and continuing to the present, he examines the proliferation, perception, and treatment of weeds in metropolitan centers from Boston to Los Angeles. In dynamic city ecosystems, population movements and economic cycles establish and transform habitats where vegetation continuously changes. Americans came to associate weeds with infectious diseases and allergies, illegal dumping, vagrants, drug dealers, and decreased property values. Local governments and citizensÆ groups attempted to eliminate unwanted plants to better their urban environments and improve the health and safety of inhabitants. Over time, a growing understanding of the natural environment made “happenstance plants” more tolerable and even desirable. In the twenty-first century, scientists have warned that the effects of global warming and the heat-trapping properties of cities are producing more robust strains of weeds. Falck shows that nature continues to flourish where humans have struggled: in the aftermath of Hurricane Katrina, in the abandoned homes of the California housing bust, and alongside crumbling infrastructure. Weeds are here to stay.