Zeynep Kezer is senior lecturer in the School of Architecture Planning and Landscape at Newcastle University, United Kingdom. 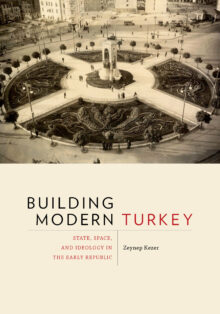 State, Space, and Ideology in the Early Republic

Building Modern Turkey offers a critical account of how the built environment mediated Turkey’s transition from a pluralistic (multiethnic and multireligious) empire into a modern, homogenized nation-state following the collapse of the Ottoman Empire at the end of World War I. Zeynep Kezer argues that the deliberate dismantling of ethnic and religious enclaves and the spatial practices that ensued were as integral to conjuring up a sense of national unity and facilitating the operations of a modern nation-state as were the creation of a new capital, Ankara, and other sites and services that embodied a new modern way of life. The book breaks new ground by examining both the creative and destructive forces at play in the making of modern Turkey and by addressing the overwhelming frictions during this profound transformation and their long-term consequences. By considering spatial transformations at different scales—from the experience of the individual self in space to that of international geopolitical disputes—Kezer also illuminates the concrete and performative dimensions of fortifying a political ideology, one that instills in the population a sense of membership in and allegiance to the nation above all competing loyalties and ensures its longevity.