A. Suresh Canagarajah taught English in the war-torn region of Jaffna, Sri Lanka, for ten years before joining the faculty of the City University of New York (Baruch College) in 1994. He is the author of Resisting Linguistic Imperialism in English Teaching. 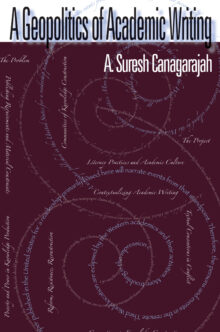 A Geopolitics Of Academic Writing

By A. Suresh Canagarajah

A Geopolitics of Academic Writing critiques current scholarly publishing practices, exposing the inequalities in the way academic knowledge is constructed and legitimized. As a periphery scholar now working in (and writing from) the center, Suresh Canagarajah is uniquely situated to demonstrate how and why contributions from Third World scholars are too often relegated to the perimeter of academic discourse. He examines three broad conventions governing academic writing: textual concerns (matters of languages, style, tone, and structure), social customs (the rituals governing the interactions of members of the academic community), and publishing practices (from submission protocols to photocopying and postage requirements). Canagarajah argues that the dominance of Western conventions in scholarly communication leads directly to the marginalization or appropriation of the knowledge of Third World communities.